Eco-friendly travel guide to Puerto Rico advises how to be a responsible tourist. Learn how to travel in a sustainable way and how to respect the local people and culture. Make your trip green by supporting locally owned hotels, organic restaurants and other businesses. Read more on how to protect the environment by making conscientious choices and how to travel green in Puerto Rico, Caribbean, North America.

Puerto Rico officially the Commonwealth of Puerto Rico and from 1898 to 1932 also called Porto Rico in English, is an unincorporated territory of the United States of America located in the northeast Caribbean Sea. It lies on a key shipping lane to the Panama Canal, the Mona Passage.

To play your part as a responsible tourist,

The air quality is generally acceptable for most individuals. However, sensitive groups may experience minor to moderate symptoms from long-term exposure. The air has reached a high level of pollution and is unhealthy for sensitive groups.

Puerto Rico is a beautiful blend of Spanish tradition, dynamic criollo culture, and recent Americanization. Most Puerto Ricans are broadly familiar with mainland US culture and behaviour, and you are unlikely to face the cultural misunderstandings that sometimes occur, for example, in rural parts of Mexico or South America. Much of Puerto Rican culture centers on the influence of music and has been shaped by other cultures combining with local and traditional rhythms. Early in the history of Puerto Rican music, the influences of Spanish and African traditions were most noticeable. The cultural movements across the Caribbean and North America have played a vital role in the more recent musical influences which have reached Puerto Rico

Spanish is largely spoken there and it will be helpful for you if you learn a few words of Spanish. It will not only simplify your trip to Puerto Rico, but it will also serve as a sign of respect to the local people.

Food operates as an expression of cultural identity. If you truly want to understand their culture, then do not forget to taste their local food from the stalls and vendors, known as ‘kiosks’. These are the best place to get the most local and most affordable food.

Puerto Rico is the home of an abundance of parks and plazas. If we go by the number it’s going to be more than hundreds of them. But these are the names that have made it to our list. The list is strictly based upon tourists’ reviews and personal preferences.

Puerto Rico and its surrounding islands boast some of the prettiest beaches in the Caribbean. From its capital San Juan to the nearby Isla Verde coastline, then there are islands like Culebra and Isla de Vieques, which are home not only to amazing stretches of white sand and turquoise sea, but also excellent snorkeling and diving thanks to a still-thriving coral reef system.

We have already mentioned Playa Flamenco beach in our ‘Top 10 places to visit’ segment. Other than that, these are the beaches we strongly recommend:

Puerto Rico’s famous landmarks are not only awesome to explore, but they are also powerful reminders of its rich history and culture, here are some of the names of some of the places.

The Castillo San Felipe del Morro in all its glory

Puerto Rico’s history stretches from pre-Columbian civilizations through modern times, including contributions from Taíno, African, and Spanish peoples. Here are some of the most visited museums: 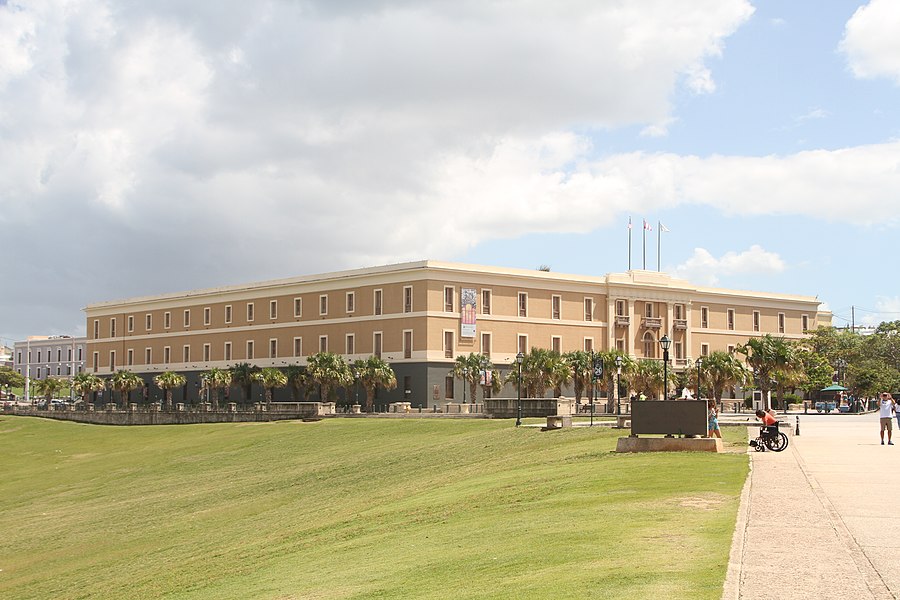 The vibrancy of Puerto Rican culture comes alive in its dishes, a celebration of flavours that visitors have the opportunity to indulge in. Some of the favourites are mofongo, tostones, pasteles, Arroz con gandules, tembleque, and coquito.

Here are some of the traditional Caribbean dishes which you will find in food stalls as well as in restaurants:

They are a favourite fritura or snack by the locals, and this is mainly because they are delicious and easy to prepare.

Tap water is treated and is officially safe to drink, though it tastes rather chlorinated; many opt for bottled water instead. Tap water may be unsafe to drink in Puerto Rico as many visitors experience diarrhea, even if they follow the usual precautions. Carry a bottle and refill it from the eateries when you stop by.

Puerto Rico is the perfect place for adventurous outdoor activities. Here are some of our favourite things to do other than sightseeing -

There are plenty of hotels, hostels, guest houses in prime locations in Puerto Rico. Nowadays, most opt for online bookings; don’t forget to read the reviews on them.

Here are some of the topmost Green Hotels in Puerto Rico -

If you want to stay longer and want your privacy, renting apartments can be a good option for you. You may come across many tourists with whom you can enjoy the daily lives of Puerto Rico. You can book them online sites such as www.booking.com etc. On such sites, locals advertise their apartment, location, and connectivity with the transport modes. Read the reviews on them before renting one. To name a few apartments where tourists can stay –

Couchsurfers share their homes, cities, and lives in profound, meaningful ways, making travel anywhere in the world a truly social experience. It is the best way to experience Puerto Rico like a local. Reach out to over hosts in Puerto Rico to discover unique places to stay, and locals to stay with. Use Couchsurfing to find accommodation in Puerto Rico, meet locals and travellers, and more. You will find many hosts if you want to couch-surf in Puerto Rico. There are multiple online sites such as www.couchsurfing.com which help tourists to take this option of staying. Still, if you want to opt for this option, extra precaution is necessary, especially for the females. Do not hesitate to ask for the details and the references of the host.

If you want to go for camping, these are the places recommended for you -

The easiest way to get to Puerto Rico is to fly, though the island is also connected to the Dominican Republic and the Virgin Islands by ferry. Puerto Rico is a city where you can find history in its every nook and cranny. If you want to divulge the originality of the city, you have to leave the usual transportation mode and look for a slower mode of transportation.

For travel within the United States, any TSA-compliant document, such as your state-issued driver's license or identification card, is sufficient identification to board a flight to or from Puerto Rico, as with any other domestic flight. Puerto Rico chooses to follow the Mainland US entry requirements. As with the Mainland, any non-US citizen must follow the Visa Waiver Program.

The island’s international gateway is the Aeropuerto Internacional Luis Muñoz Marín in San Juan, with numerous connections to the US and all over the Caribbean, while regional airports at Aguadilla and Ponce are increasingly accepting direct flights from the US mainland and nearby islands.

There aren’t any non-domestic trains running in Puerto Rico.

Though hitchhiking isn't the safest mode of transportation if you are not a local and don’t know the city well, still, when in Puerto Rico, it is one of the best transport modes that people consider. In Puerto Rico, locals say “pedir pon” in Spanish, which means hitchhiker. So they are quite used to this mode of transport. They are mostly friendly people, who would tell a million things about the island if you asked. Always learn a word or two of Spanish, this comes in handy when situations like this. But again, when hitchhiking, make sure that you are being careful about the surroundings so that you wouldn’t be tricked.

A commercial ferry service connects the west coast city of Mayaguez and Santo Domingo in the Dominican Republic. This service is a very popular and convenient way to travel between both cities.

The concept of sustainable shopping is new to the world. People are trying to change their lifestyles and adopting eco-friendly practices that support the local community. As a responsible tourist, you must buy souvenirs and antiques from the local markets of Puerto Rico.

Puerto Rico is facing a waste crisis. Unlined landfills across the island are overflowing with uncovered waste, sending foul odors into homes, contaminating drinking water, and attracting rodents and other pests. To stop this, the government of Puerto Rico has taken many initiatives. The goal is to reduce, reuse and recycle the materials that are buried daily in landfills and sanitary landfill systems in Puerto Rico. It also seeks to minimize the impact they have on reaching estuarine waters and their ecosystem. They encourage the estuarine population to begin to reduce excessive materials, reuse materials that have expired their usefulness, and recycle the materials generated in their home, work area, and community.

The government has instructed many sanitization and recycling companies to offer convenient, affordable curbside pickup of their garbage and recycling. They offer a variety of service levels to fit the needs of any household as they serve almost all roads and private drives in the county, providing them with curbside service for the same price OR LESS than self-haul, so the people in Puerto Rico can save the time, money, and bother of hauling their garbage.

If you have a USA student visa, then it won’t be a problem if you want to study and work here. Puerto Rico is home to 152 accredited universities and colleges (21 of which are based in the capital city of San Juan), according to the Institute of Education Sciences. Puerto Rican universities follow the US system, awarding four-year bachelor’s degrees, as well as Master of Arts (MA) and Master of Science (MSc) degrees, and – more rarely – PhDs. Most courses are taught in English and Spanish. While most universities in Puerto Rico are recognized by the US, you should make sure to check the university you are considering has some kind of international and professional accreditation, and that your qualification will be valid in your home country and elsewhere.

If you are okay with part-time jobs, you can upload your resume on job sites such as www.indeed.com, www.simplyhired.com or you can ask the locals about any part-time job opening they know about.

As mentioned above, foreign student programs are very much available in Puerto Rico. All you have to do is, contact your home university if they have collaboration with the university here.

There are many Au Pair jobs available in Puerto Rico. To have a good salary or a likeable job you have to submit your resume to online portals like www.aupair.com, www.greataupair.com, www.topaupairs.com. The jobs they provide like, child care, old age home jobs, etc.