Eco-friendly travel guide to Pretoria advises how to be a responsible tourist. Learn how to explore the attractions in a sustainable way and how to respect the local people and culture. Make your trip green by supporting locally owned hotels, organic restaurants and other businesses. Read more on how to protect the environment by making conscientious choices and how to travel green in Pretoria, South Africa.

Pretoria is located in South Africa and is believed to be the de facto capital of the country. its development and expansion benefits both the locals here, the country and even the region. Traveling responsibly while we in the city will go a long way in ensuring that its growth and expansion maintains on course. Some of the ways in which we can travel responsibly in Pretoria are:

The air quality of Pretoria is believed to be poor with the readings for PM2.5 AQI and PM10 AQI standing at 117 and 55 respectively. This poses a health risk to those who might be having health conditions. Therefore, you are advised to consult with your doctor before you visit Pretoria. In terms of pollution, the local government here has been making progress in ensuring that most of the waste in the city is efficiently managed so as not to pollute the air and soil.

South Africa has been known to be the most diverse country on the continent. A majority of the country's local population still live in poverty in informal settlements. The cultural beliefs and customs are highly upheld by these people despite influence from the western countries. South Africans living in urban areas speak English or Afrikaans in addition to their native languages. There exists a small group of Khoisan speakers who are not among the official languages in the re-known eleven official languages.

Literature has since time immemorial taken root in South Africa. One of the most popular novel writers was Solomon Thekiso Plaatje's Mhudi, a black author who wrote his novel in 1930. Among the white South African authors, Nadine Gordimer takes center stage. She was the seventh woman to be awarded the Nobel Prize for Literature in 1991. Her novel was released in 1981.

Music in South Africa has continued to evolve as time has gone by. The majority of African artists who sang in English during apartheid have now embraced the traditional African languages, and have developed a unique style called Kwaito. One of the most re-known musicians in South Africa is Brenda Fassie, who rose to popularity with her song "Weekend Special", written and sang in English.

There are many attraction sites here in Pretoria which you can visit to make your visit to the city to be memorable. They include the Groenkloof Nature Reserve, the Pretoria National Botanical Garden, and the Union Buildings. You can also visit the Ditsong National Museum of Natural History where you will get to learn the history of the various hominoid discoveries that were found here in the city.

Other public parks found in Pretoria are:

Pretoria is located inland in South Africa and is not located close to any water body thus it does not have any natural beach.

• The Voortrekker Monument. It is located in Pretoria, South Africa. It is a huge granitic structure that is situated at the peak of a hill. It was raised to perpetuate the Voortrekkers who exited the Cape Colony between 1835 and 1854. It was designed by architect Gerard Moerdijk and was officially declared a National Heritage Site in July 2011 by the South African Heritage Resource Agency. It measures 40 meters by 40 meters by 40 meters. Its appearance is similar to the Völkerschlachtdenkmal monument in Germany and the Dôme des Invalides monument in France.

• Kruger House. It is located in Pretoria, South Africa. It was the Pretorian residence for one of the country’s presidents, Paul Kruger, who was also the Boer leader. It was constructed in 1884 by architect Tom Claridge and Charles Clark. Milk was used to mix the cement during construction instead of water. The cement that was used here was also substandard. It was among the pioneer buildings in the city to be connected with electricity. Some of the items found here are presents that were given to Paul Kruger. Here, you will also find two lion statues on the verandah made of stone. They were among the gifts presented to Paul Kruger in October 1896.

• The Ditsong National Museum of Natural History. Initially known as the Transvaal Museum, this museum is located along Paul Kruger Street in Pretoria, South Africa. It was founded in 1895. It was later acknowledged to be among the founding Museums of Ditsong Museums of South Africa. It is home to the collection of Plio-Pleistocene fossils such as hominoids from Swartkrans, Sterkfontein, and Kromdraai, the late Permian therapsids, and the Cradle of Humankind. Here, you will also find a complete skull of an Australopithecus africanus specimen known as Mrs. Ples. You will also find collections of mammals, reptiles, invertebrates, and birds.

Both locals and foreigners usually love the food that is usually sold in the streets of Pretoria. The disease council in the country has deemed this foods to be safe to eat. Some of these street foods include:

Pretoria has a huge number of bars where you can relax and enjoy a variety of local and even international drinks. You will get a chance to experience the amazing nightlife Pretoria has to offer. Some of these bars in the city include:

The CDC of the USA has acknowledged South Africa as among the few countries in the world whose faucet water is relatively safe for consumption, especially in cities including Cape Town and Pretoria. In Pretoria, the water treatment plants here ensure that there is no E.coli or any fecal coliform in the faucet water. You can also choose to buy bottled water from the vendors in the city who usually sell it at affordable prices.

Other breweries located in Pretoria include:

There are many attraction sites here in Pretoria which you can visit to make your visit to the city to be memorable. They include the Groenkloof Nature Reserve, the Pretoria National Botanical Garden, and the Union Buildings. You can also visit the Ditsong National Museum of Natural History where you will get to learn the history of the various hominoid discoveries that were found here in the city.

Majority of the locals here in Pretoria have enrolled in various websites that offer couchsurfing services so that they can link up with visitors planning to travel to the city. They see this as an opportunity to meet new people from different cultures and even learn a few things from each other. This is also an opportunity to make new friends.

Camping in Pretoria is usually fun, enjoyable, and also safe. You will be able to engage in many camping activities here including team building, singing, campfires, and even engage in various games. Both the people and staff who are in these campsites in the city are kind and peaceful people. Some of the campgrounds that are found here in the city include:

Pretoria has no airports thus air transport is non-existent in the city at the moment. The nearest airport to Pretoria is located in the nearby city of Johannesburg.

There are various bus companies which operate in Pretoria and also to other cities in the country. The prices offered are relative to the distance you are covering, the type of bus, time of travel, and the bus company you are using. Some of these bus companies are Translux, BazBus, Greyhound, and the Intercape Mainliner. 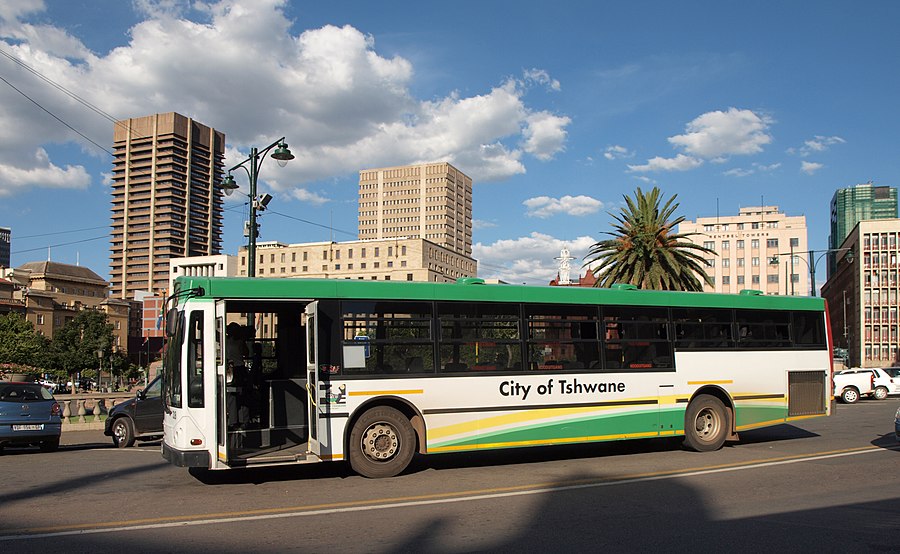 A local bus on the streets of Pretoria

Pretoria railway station is the main station in Pretoria, South Africa. It is situated in a 1910 Herbert Baker-designed building between Pretoria's central business district and Salvokop. It is a stop on Shosholoza Meyl inter-city services from Johannesburg to Polokwane and Nelspruit, as well as the terminus of various Metrorail commuter rail services in the northern part of Gauteng. Pretoria is also the northern terminus of Cape Town's luxurious Blue Train service. The Gautrain rapid-rail service has platforms and tracks right next to the main-line station.

Hitchhiking is easy here in Pretoria. You will need to signal with your hand and a motorist who would happen to head to your destination will gladly take you there.

Minibus taxis (also known as combis) are the most common type of taxi, and they are often the newer, larger kind, costing R12 per trip and covering most of the city, including nighttime service on major thoroughfares. Tell the driver where you want to go, and he should be frank about whether or not he is going that way. Gautrain feeder buses operate on a limited number of routes across the region, costing R20 per trip and requiring the purchase of a prepaid Gautrain card in advance. During business hours, city buses even ply the streets.

There are several walk tours here in the city where you will get a chance to tour some of the attractions here on foot. You will be able to go with guides who are usually kind and ready to answer any questions you have while on tour.

Various organizations have realized how tourists love to explore areas near their residences on bicycles and have decided to make it easier for them to either purchase or hire a bicycle. The hotel industry has invested in this field by purchasing many bicycles and make them available for hire by to tourists.

Translux, BazBus, Greyhound, and the Intercape Mainliner are the main public buses operating within Pretoria and also connects the city to other destinations in the country. Most of these buses begin operating from rush hours till late in the evening when they begin reducing in number. Some of them ply routes that connect Pretoria to nearby cities such as Johannesburg.

Pretoria railway station is the main station in Pretoria, South Africa. It is situated in a 1910 Herbert Baker-designed building between Pretoria's central business district and Salvokop. It is a stop on Shosholoza Meyl inter-city services from Johannesburg to Polokwane and Nelspruit, as well as the terminus of various Metrorail commuter rail services in the northern part of Gauteng

The local authority in Pretoria has been partnering with the national government and other organizations to set up recycling centers within the city which will effectively handle all the waste produced in the city. Some of these recycling centers include:

The waste that is produced in Pretoria constitutes of both solid and liquid waste with the majority being solid waste. From plastics to metals to even garbage, all of these solid wastes are produced here in Pretoria.

Pretoria is one of the most developed cities in South Africa and the region at large. Many business opportunities keep presenting themselves in the city. Both investors and expatriates have noticed this potential and have been coming into the city to either invest on already existing businesses or to start new business opportunity. The United Nations has also set up various offices in the city to facilitate its operations in the city and the region. These entities are:

Pretoria is one of the most developed cities in South Africa and even the region. This has in turn attracted many job seekers to the city including those seeking for nanny jobs. For those living in the high-end estates of Pretoria and need nannies, job seekers usually flock in these estates in order to increase their chances of being employed. Some have even gone ahead to acquire additional skills such as first aid training to increase their chances of being employed. There are several AU pair organizations in Pretoria which offer these services and they include: