Eco-friendly travel guide to Sierra Leone advises how to be a responsible tourist. Learn how to travel in a sustainable way and how to respect the local people and culture. Make your trip green by supporting locally owned hotels, organic restaurants and other businesses. Read more on how to protect the environment by making conscientious choices and how to travel green in Sierra Leone, Africa. 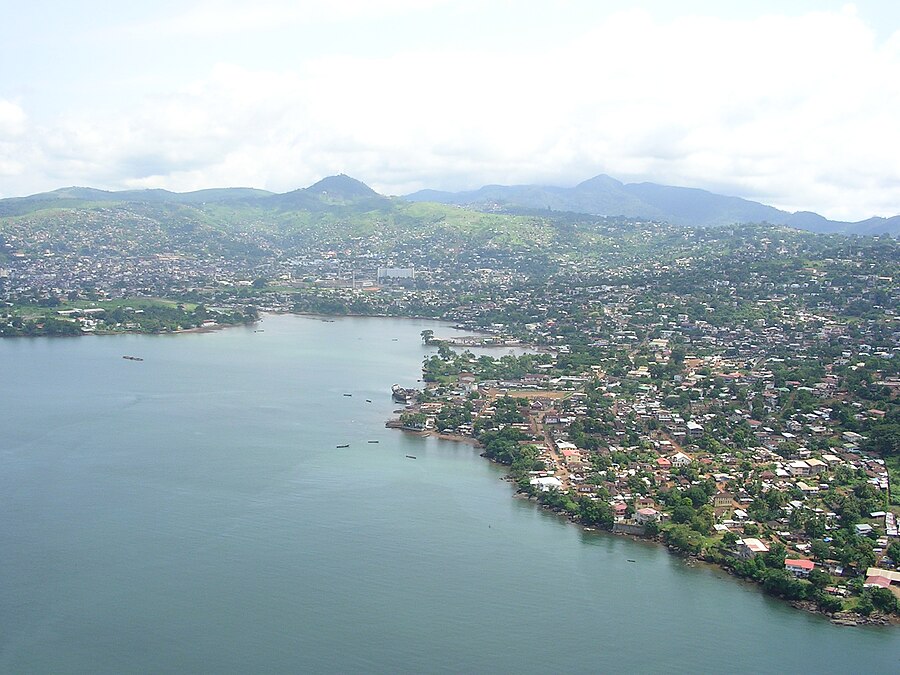 An aerial view of Freetown - the capital of Sierra Leone

Sierra Leone is located in West Africa. Traveling responsibly while in the country will go a long way in preserving the natural resources found here, boost the lively hoods of the locals here, protect the environment and even boost the various developments in the country. When we use water responsibly, we will be doing a favor to ourselves and also the environment. Some of the ways in which we can use water responsibly includes closing the tap when we are done using the tap water and taking quick showers instead of bathing. We can even install rain water collection tanks to conserve water. Another way of traveling responsibly while in Sierra Leone is by disposing of waste appropriately. The national government has tried to install modern waste collection system to help in sorting of this waste from the disposal stage. Recyclable wastes such as plastics, glass, and metal can be disposed of separately from the wastes that cannot be recycled.

Another way of traveling responsibly while in Sierra Leone is majorly using public transport while moving around in the country. When we use buses more often than personal cars to move around the country, we will be reducing the number of cars traveling on the roads thus minimal exhaust emissions will be released into the atmosphere. Also, we would be reducing the amount of time spent in traffic jam congestions as there will only be fewer cars on the road at a given point in time. Another way of traveling responsibly while in the country is by residing in accommodation facilities that adhere to environmentally friendly practices. This will go a long way in preservinv the environment and maintaining its natural beauty. Another way of traveling responsibly is by supporting initiatives in the country aimed at improving the lives of the locals here. We can contribute directly to the economy by supporting local artists and farmers by buying directly from them thus improving their living standards.

The air quality in Sierra Leone has rapidly improved as the years have gone by. This is through the help of both the national and international organizations that have taken it upon themselves to eliminate excess waste in the country which had been one of the greatest threat to the air quality of Sierra Leone. In terms of pollution, the national government has also put in place measures to curb the illegal accumulation of solid wastes in the country which was the greatest pollutant of the environment in the country.

Rice is the staple food of Sierra Leone and is consumed at virtually every meal daily. The rice is prepared in numerous ways, and topped with a variety of sauces made from some of Sierra Leone's favourite toppings, including potato leaves, cassava leaves, crain crain, okra soup, fried fish and groundnut stew. Along the streets of towns and cities across Sierra Leone one can find foods consisting of fruit, vegetables and snacks such as fresh mangoes, oranges, pineapple, fried plantains, ginger beer, fried potato, fried cassava with pepper sauce; small bags of popcorn or peanuts, bread, roasted corn, or skewers of grilled meat or shrimp.

Media in Sierra Leone began with the introduction of the first printing press in Africa at the start of the 19th century. A strong free journalistic tradition developed with the creation of a number of newspapers. In the 1860s, the country became a journalist hub for Africa, with professionals travelling to the country from across the continent. At the end of the 19th century, the industry went into decline, and when radio was introduced in the 1930s, it became the primary communication media in the country. Radio is the most-popular and most-trusted media in Sierra Leone, with 85% of people having access to a radio and 72% of people in the country listening to the radio daily. These levels do vary between areas of the country, with the Western Area having the highest levels and Kailahun the lowest. Stations mainly consist of local commercial stations with a limited broadcast range, combined with a few stations with national coverage – Capital Radio Sierra Leone being the largest of the commercial stations.

The arts in Sierra Leone are a mixture of tradition and hybrid African and western styles.

Sierra Leone is located in West Africa. There are many attraction sites that you can visit while here in the country to make your stay memorable. Some of these amazing sites found in Sierra Leone include Lake Sonfon, the Banana Islands, and the Kambui Hills Forest Reserve. You can also visit the various national parks such as the Outamba-Kilimi National Park, in the country where you can appreciate the wildlife that Sierra Leone has to offer. You can also visit the Sierra Leone Peace Museum where you will get to learn and appreciate some of the important historical events that occurred here in Sierra Leone.

Victoria Park: This amusement park is located in Freetown, the capital city of Sierra Leone. Children below three years have it all at this park as they get to enter free of charge. It also has a swimming pool, a bar, and a restaurant. Ample parking is available here.

Street food here in Sierra Leone has touched the hearts of many with its taste and prices being vouched for by both locals and foreigners who visit the country. They include :

Abu's Poyo Place. This bar is located in Sierra Leone. Here, you will be able to enjoy a diverse assortment of beers. Adequate seating arrangements are available here.

Sierra Leone is located in West Africa. There are many attraction sites that you can visit while here in the country to make your stay memorable. Some of these amazing sites found in Sierra Leone include Lake Sonfon, the Banana Islands, and the Kambui Hills Forest Reserve. You can also visit the various national parks such as the Outamba-Kilimi National Park, in the country where you can appreciate the wildlife that Sierra Leone has to offer. You can also visit the Sierra Leone Peace Museum.where you will get to learn and appreciate some of the important historical events that occurred here in Sierra Leone.

Sierra Leone is located in West Africa. This country can be accessed by either air, road, rail, or water. The national government of Sierra Leone has been working hard to improve the transportation infrastructure in the country to ease transport within her borders.

The total road network of Sierra Leone is about 11,700 kilometers where only 936 kilometers is paved. This automatically tells you that transport by bus in the country is not wide spread despite it being the best option to travel while in the country. Plans are underway to build a major highway, the Trans–West African Coastal Highway, which will connect several countries in the region such as Sierra Leone, Liberia, Guinea, and 11 other nations belonging in the ECOWAS block.

Hitchhiking is one of the enjoyable experiences while here in Sierra Leone. You can get a ride from the many kind hearted motorists who will be willing to take you at least close to your destination if not directly to your stop. You will be able to exchange ideas and even learn something of each other's culture during the journey.

A total of 800 kilometers of waterways are existent in Sierra Leone. 600 kilometres of these waterways are navigable throughout the year. The main ports within the country are Pepl, Bonthe, and the capital, Freetown. The Queen Elizabeth II Quay, which is located in the capital, Freetown, is the only deep water facility in the country where large cargo ships and military ships can dock.

The designing industry has really picked up a notch in Sierra Leone. Both experienced and upcoming designers are slowly embracing the use of environmental-friendly materials in making of clothes so as to reduce the adverse effects these clothes will have on the environment after thy are disposed of. These materials are also recyclable as they can be used to make new clothes.

Both the national and international organizations are coming together to set up modern recycling centers to handle the waste that is produced in the country. This has been a boost in the combined efforts against illegal accumulation of waste in the country.

Solid waste in the county has always been a menace to both the local and national governments. Illegal accumulation of waste poses a great threat to the health and tourism sector. In terms of health, these illegal dumpsites harbors rodents and other disease-causing organism which eventually find a way to infect humans. The tourism sector is usually hit when the natural beauty of the landscapes is threatened by waste. Also, just like everyone else, nobody likes falling sick thus many tourists will avoid coming into the country when waste management systems have failed.

Sierra Leone continues to show promise in becoming one of the greatest countries in Africa. This has attracted several investors and expatriates who have began coming into the country to boost already existing businesses with the aim of boosting the economic levels in the country. The United Nations has also set up its several offices in the country to help in its operations within the country and the region. These offices are :

University of Makeni (UNIMAK) This university was initially referred to as the Fatima Institute. This catholic university is the first privately-owned university in the country. It was founded in October, 2005. The main courses offered here are Public Health and Special Needs Education.

Domestic jobs here in Sierra Leone have been sought after by many locals especially those who have not been employed in the formal sector. Many usually move to the high-end cities where people who are in high social classes usually live in. These nanny jobs are usually available here but so is the high number of job seekers thus making this venture a tricky one. ome job seekers have gone an extra mile to acquire skills that will help them to be more appealing to employers. Such skills include first aid training. Employers would feel a lot safer leaving their homes and children under the care of qualified domestic workers. There are also websites which locals here in Sierra Leone use to find domestic jobs in European and Middle Eastern countries. Foreigners are also encouraged to apply for these nanny jobs in Sierra Leone.