Eco-friendly travel guide to Tianjin advises how to be a responsible tourist. Learn how to explore the attractions in a sustainable way and how to respect the local people and culture. Make your trip green by supporting locally owned hotels, organic restaurants and other businesses. Read more on how to protect the environment by making conscientious choices and how to travel green in Tianjin, China.

Tianjin or Tientsin is a significant Northern Chinese port city and part of the national Central Chinese towns. The city is home to more than 15 million people that makes it the 11th most populated city in China. Tianjin covers about 11,946 square kilometres of land and is home to many stunning European style building and churches. The majority of the Chinese communities in Tianjin are either follower of Catholicism or Buddhism.

So, while visiting Tianjin, you will need to travel in a way that causes the least harm to the local communities and the environment. It is essential that you travel responsibly or you will end up creating a wrong impression of tourists in the minds of the locals.

As Tianjin is a major port city in the northern region of China, the pollution levels are relatively high. Because of the importance of the town, the city homes many industries, manufacturing units, and plants that are the main contributors to pollution. If you have any breathing ailments like asthma, then prefer carrying your medicines and stuff when you visit Tianjin.

If you want to get the most out of your Tianjin experience, you have to get a closer look into the lives and culture of the local communities. You can do this by befriending a local or attending a festival or social event. These things will help you get to know the Chinese culture in a better way and also respect it.

Tianjin is a great place to explore Chinese culture and beauty. You will find that it is home to many stunning architectural buildings, monuments, and churches, as well as some peaceful places like parks and beaches. You can spend a great time exploring the beauty of this port city.

The public gazebo at the People's (Renmin) Park in Tianjin

Tianjin Drum Tower which is an important landmark is in the center of the city, expanding to four directs, so claiming that "Drum Tower" is the birthplace of Tianjin.

Inside the Tianjin History Museum

Tianjin has a very famous food culture. Many people travel to Tianjin expecting to taste the delicious delicacies in Tianjin – mainly its dining that includes river products and seafood, making Tianjin cuisines appealing to refined taste with many unique snacks of varied flavours. If you're visiting this town, be sure to have a taste of different snacks and local dishes along with an eco-friendly environment. Some shortlisted local traditional and vegetarian restaurants are as follows:

Tianjin is home to 15 million people, and a mere 4.9% of water is used as drinkable water as there is no general information available by the World Health Organization. Due to the increase in water pollution in Tianjin, the drinking water quality and accessibility are shallow. So, if you’re visiting Tianjin, always take extra precautions as the water provided is highly refined, but it might pick up pollutants during its way to your tap.

As Tianjin's culture is highly influenced by European history, Tianjin people have very well adapted the way of living and wisely choose their tastes and preferences concerning light meals. Tianjin has many options for organic cafeterias for local-street food lovers and also for those who are having a busy and hectic life throughout their journey.

While strolling in the streets of Tianjin, you will find some cafés which might be of interest. They are:

In recent years, the love for breweries has exploded in Tianjin. From Burgeoning with honest craft brew makers to people making home-made breweries, the beer culture is expanding on the West side of China; and in Tianjin, you can find many such places where the cold brew is served in eco-friendly establishments.

Tianjin is one of the busiest cities in China as it is the third-largest municipality in China after Beijing and Hong Kong; and the most important manufacturing centre of North China. Tianjin is the right choice for people who are living outside the country as the standard of living is relatively high in this city. With loads of activities involved in each corner of the city, Tianjin is a fascinating town with many attraction points for citizens and tourists as well.

In recent years, the yoga craze has been popping all over Tianjin. It gives them hope and helps them to keep their spirits up. There are many yoga studios in almost every corner of Tianjin, as well as other cities throughout China.

When it comes to accommodation options in Tianjin, they are endless. You can opt for green hotels, hostels, guest houses, rental apartments, and campsites. If you are staying for a short time, then you should prefer hotels, hostels, and camps. But, if you are staying in Tianjin for a more extended period and are travelling with your family or friends, then you should prefer guest houses or apartments. Before booking a 5-star accommodation option, try to see if the place follows certain sustainable measure as it will help you keep your carbon footprint minimal.

Couch-surfing is possible in Tianjin, but it has not gained much popularity or recognition amongst the locals. Since the locals are more of conservative minds, they don’t allow foreigners to stay at their homes. It is the primary reason why couch-surfing isn’t that widespread in China. You can find a few couch-surfing hosts on the website and set a deal with them before visiting Tianjin.

There are many ways to reach Tianjin as it has water, air, and land access. The best option for foreign tourists is airways as they are cheaper and more comfortable, but you can also opt for other options like buses or railway networks. If you are outside China, then you should prefer reaching Tianjin directly via an aeroplane. But, if you are already in China, you can opt for the roadways, railways, or even waterways.

The best way to reach Tianjin city is by airways. The city is served by Tianjin Binhai International Airport that provides international as well as domestic flights. As a tourist, you should prefer getting a direct flight to Tianjin, instead of transfer flights.

If you are already in China, then you can opt for travelling to Tianjin via buses. Some private buses are available from all major cities and towns. These are not only cheap but one of the most comfortable modes of travelling.

A bus in Tianjin near the Railway Station

There is no international railway system in the country, but you can opt for using the railways if you are already in China. The Chinese railway network is a widespread and efficient one that will help you reach even the smallest town or village with convenience.

Hitchhiking is possible in China as people love to help out tourists. You can easily ask for rides from the highways or roads. Although, you may face some problem in getting rides as people often don't stop for unknown men on streets as road crimes are quite common in Asia.

Apart from trains, aeroplanes, buses, and hitchhiking, you can reach Tianjin city by boats and rental cars. These are not the best options as they are not at all cheap and cause a lot of pollution as they use fossil fuels.

Tianjin city is equipped with a well-developed and connected transportation network that you can use to get to the various areas inside and outside the municipality. You can opt for walking or rent electronic vehicles and use the public transport system.

Moving around Tianjin by walking isn't the best option as it has quite a big area and you will not be able to cover all places just by walking. You can opt for walking and explore one region a day.

Bicycling in Tianjin is an excellent way of moving around and exploring the vast area of the municipality. By using a bike, you will be able to travel to more places in a day and will undoubtedly enjoy observing the local culture and people's livelihood while riding around the streets.

Electronic vehicles are present in Tianjin in a large number, and a lot of local Chinese people own such electric bikes and cars. You can find some stores that give these cars for rent. These vehicles are the ones you should opt for as they cause no harm to the environment.

Public buses are the best way to move around Tianjin as they are not only efficient, but they are very comfortable and convenient. You will find that these buses cover almost every nook and corner of Tianjin. Some of these buses even travel to places outside the city.

Trains and trams are available in Tianjin and are some of the best options for moving around the city. You will find that these are very cheap and available in almost every area of the town. You can also meet many locals and fellow travellers here and interact with them. 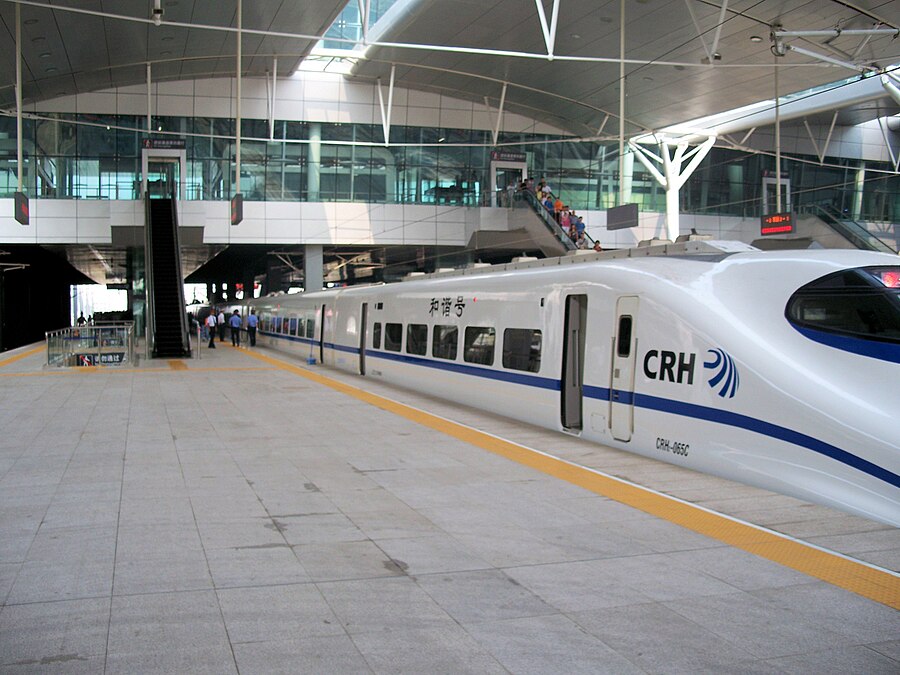 The bullet trains at the Tianjin train station

Sustainable shopping is taking over the world for the last two decades. It is also famous by the name eco-shopping and focuses on the usage of items that are friendly to the environment and the local communities of the area. You can find such eco-friendly items in the various food markets, second-hand stores, eco-fashion stores, and flea markets in Tianjin.

Recycling and usage of reusable items are quite popular in China. Since the pollution levels are incredibly high in Tianjin, the government has implemented various recycling policies that the locals and the tourists have to follow. There are some agencies and stores that offer to recycle used items in Tianjin.

The waste management of Tianjin isn’t the best one in the country, but it is helping in maintain and lowering the pollution levels. You will find that Tianjin’s municipality has made available various disposable containers, bins, and garbage vehicles that collect wastes from all households, buildings, and complexes in Tianjin.

If you are seeking to study or work in Tianjin, then you will find endless opportunities in various fields. It is because the city possesses some world-renowned educational institutes and organizations that are open for foreign persons.

The student exchange program where students from different parts of the world get the opportunity to study in a foreign country is possible in Tianjin. The city possesses some significant educational institutes that offer quality educational opportunities.

Au Pairing is surprisingly common in Tianjin as there are certain groups of people that are unable to get even one meal a day. You can register yourself in the program and help out a family in need.

Volunteering activities are the primary way through which the many societal, environmental, and political issues are made aware of the local communities in Tianjin. Some non-profit organizations and agencies are present that focus on resolving such issues.

Volunteering is a great way to learn about the deep-rooted issues of the local communities. By participating in volunteering activities, you can play your significant role as a responsible tourist, and lend your hand to a person in need.